Western Sahara is the last African country to have not yet obtained formal and substantial independence. The international status of Western Sahara, for the UN, is that of a territory to be decolonized, included in the list of “non-autonomous” territories. Morocco represents a country that illegally occupies the Sahara.

Origins of this people
Before the Spanish colonization the Saharawis are a nomadic people, divided into numerous tribes that in moments of emergency and necessity rediscover the unity and conscience of belonging to the same set, with a common origin. The great majority of the Saharawi population is the result of a symbiosis between the Berber and the Arab people.
They share the same language, hassanya, the same religion, Islam. The nomads of Western Sahara are monogamous and greatly value the female figure, responsible for the management of the camps and the education of their children. The cult of freedom and the strong spirit of solidarity are the most important traits of the Saharawi nomads, who for their freedom have always shown themselves ready for great sacrifice.

The Spanish colonization began in 1884-1885, the year of the Berlin conference in which the European states shared the African continent by table. The Spanish Sahara was created. It was not until the late fifties, when the phosphate deposits were discovered in the town of Bu Craa, that Spain became interested in Western Sahara.
In 1965 the United Nations formulated the first invitation to Spain to begin the process of decolonization of Western Sahara (resolution 2072XX) which was followed until 1973 by six other resolutions, which in addition to requesting the liberation of the region, invited Spain to organize a referendum under the protection of the United Nations to give the population the opportunity to freely express their right to self-determination.
In 1974 Spain decided to organize a process of decolonization of Western Sahara and a self-determination referendum, under the aegis of the UN, with which the Saharawi population would have decided its future. Simultaneously with this Spanish declaration, Morocco (King Hassan II) made it known that he would never allowed a referendum and invaded Western Sahara. Meanwhile, Mauritania also began to claim historical rights on Western Sahara.
Spain abandoned the Saharawi people to its fate, signing November 13, 1975, the tripartite agreements of Madrid between Spain, Morocco and Mauritania. This agreement will ratify the disengagement of Spain and the division of Western Sahara, (the southern part went to Morocco and the northern part to Mauritania). With military occupation Moroccan, the war began. The exodus of a large part of the Sahrawi people began to take refuge in the Algerian desert near Tindouf, where it still lives today.
Now, the Saharawi people are divided: one part lives in the territory occupied by the Moroccans (to the west of the wall), the other in exile, especially in the Algerian refugee camps. In the territory freed from the Polisario Front (to the east of the wall), nobody lives except for some nomads.
On February 28, 1976, together with the Saharan National Council, the birth of the RASD (Arab Democratic Saharawi Republic) was proclaimed, a free, independent, sovereign state, organized according to a national democratic Arab system of Unionist, progressive and Islamic religion. The United Nations recognized RASD as a representative of the people of Western Sahara.
In the meantime, Mauritania proceeded on 25 August 1979 to a peace agreement with the Polisario Source on the basis of which Mauritania withdrew from the occupied areas.
After years of war, peace agreements were signed with the UN mediation in 1990. The plan included a ceasefire, the deployment of UN forces
above all a referendum on self-determination (independence or integration with Morocco).
In 2003 a second plan, which provides for five years of autonomy followed by a self-determination referendum, is accepted by the Polisario and rejected by Morocco.
The last meeting of the UN CDS produced only a further postponement to try and get out of what Kofi Annan called a “dead end”.

Life in the territories occupied by Morocco
With the invasion of 1976 and the entry of troops into the territory, the Moroccan monarch began the process of denaturing of the Saharawi identity, marked by innumerable violence and systematic violations of human rights and by a campaign of denigration of the Polisario Front. While trying to eliminate every Saharawi identity, a policy of populating the colony was pursued, in order to give a different configuration to the population of Western Sahara: that of a population faithful to its king. The Moroccan settlers were recruited thanks to an economic incentive and the prospect of land recovery. In the occupied territories the military police gave birth to a real regime of terror. In fact, one of the greatest violations occurring in Western Sahara is the disappearance, the kidnapping of Sahrawis in general. In fact, the desaparecidos are sadly famous. Today there are still 800 missing Sahrawi civilians.
The latest report by the United Nations High Commissioner for Human Rights delegation, which visited the occupied territories of Western Sahara in May 2006 and in the refugee camps of Tindouf, he mentions the “testimonies of Saharawi activists met by the delegation” in El Aaiun who denounced “torture” and “mistreatment” inflicted by the police and Moroccan auxiliary forces to Sahrawi demonstrators claiming the independence of Western Sahara.

The refugee camps of Tindouf
About 200,000 Saharawis under the Moroccan bombings chose the route of escape to the Algerian territory, in the area to the west, near Tindouf, on a desert plateau covered with stones and sand, about 500 meters above sea level.
The camps are structured in 4 provinces (Wilayas), 25 municipalities (Dairas) and 3 residential schools.
The most distant camp is located about 160 km from the center of the camps and the others are reachable within a radius of 30-60 km. The wilaya and the daira have names of cities and localities of the Western Sahara, occupied by Moroccan troops, to emphasize the close link with their homeland. 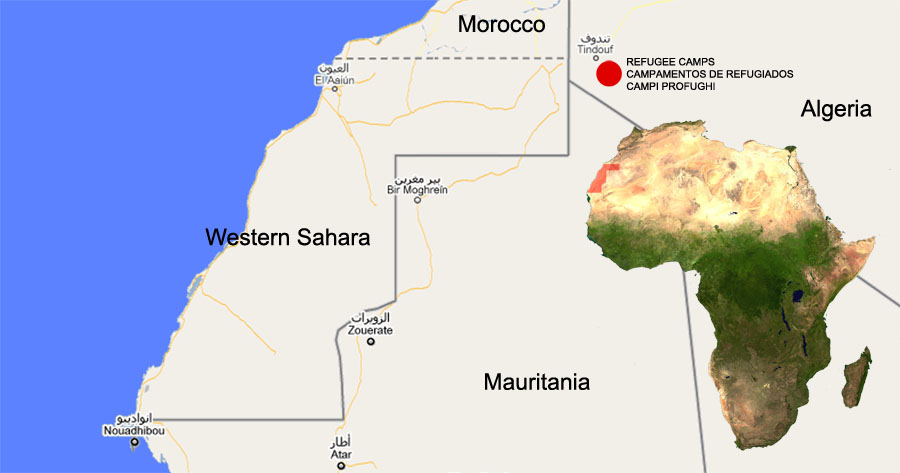 Tifariti and the liberated territory
Tifariti is 320 km from Rabuni, all on the track; it takes 7 hours with a jeep and an expert driver. It is an extremely arid landscape, with only a few thick bushes in the valleys; it is a territory scarcely populated by nomadic Saharawi, with small herds of dromedaries and goats.
Tifariti today is depopulated, but has had a troubled history: occupied from 77 to 79 by Morocco, is subsequently released; 1991 is the year of the armistice, the meetings last a long time, but three days before the signing of the truce Tifariti is invaded and destroyed; the Moroccan army bombs the newly built hospital and the school, where the nomadic and semi-nomadic people sent to study their children; the dead are hundreds; all houses and camps are destroyed. This attack, however, costs dear to Morocco, which loses 2 planes.
The wall is about 100 km from Tifariti; there is a post of international observers sent by the UN (MINURSO), which controls the territory on both sides of the wall, with planes and helicopters. Part of the territory is still mined, and the army is engaged in mine clearance.
At 30 km there are rupestrian graffiti known for a few years, which forced archaeologists to rewrite the history of the Sahara. Part of the graffiti have been stolen, and they are disappeared.

Future
There is a disenchantment among the Saharawis: so many delays and slowness of the UN have led many people to lose faith in the UN. The current situation is a stalemate and the referendum seems to be far away.
This reality is undoubtedly due to a firm but strong lack of will on the part of Morocco, comforted by some countries that do not want peace and hinder the respect for international law. Among these is France, which continues to make political pressure on international bodies such as UNHCR or the PAM (Food Program World) to reduce food rations to be distributed among the Saharawis in refugee camps.
The media outflow of systematic violence in the occupied territories, the peaceful resistance that its victims continue to support and the widespread awareness-raising activities the Sahrawi cause, brought forward by the Polisario, seem to constitute, today, the only real possibility of the restart of the path of peace, which the United Nations, in these 30 years, have not been able to manage, crushed by the pro-Moroccan position of France and international war and economic interests.
Your presence can help these people who are organizing themselves and that can really be supported to get out of the refugee camps, to free themselves.